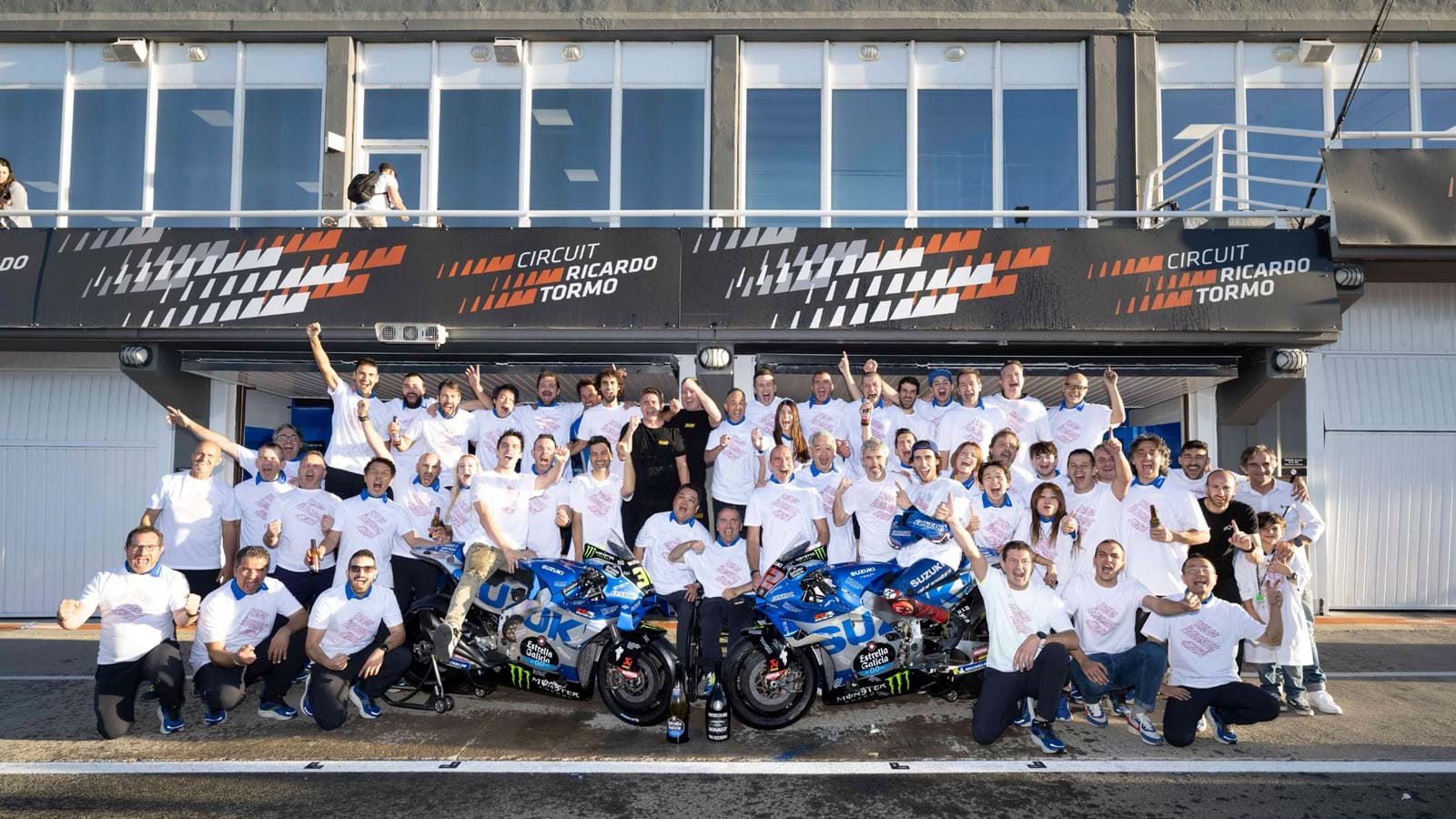 The final race weekend of the 2022 MotoGP World Championship season has ended with emotions running especially high for Team Suzuki Ecstar, who bow out – not only from the season, but from the championship.

They did it in spectacular style as Alex Rins led from start to finish in the Valencia GP, taking a whole-hearted victory. Joan Mir showed his usual grit and perseverance to take a solid sixth place.

The team have achieved many great things in the relatively short space of just eight years, with the undoubted highlight being the team and Joan Mir becoming World Champions in 2020.

The journey to the final flag has been quite the adventure, ranging from the very first prototype test in 2012 to the last victory just a few weeks ago in Phillip Island, so instead of dwelling on our exit, we wanted to highlight some of the key moments of our last eight years in MotoGP: 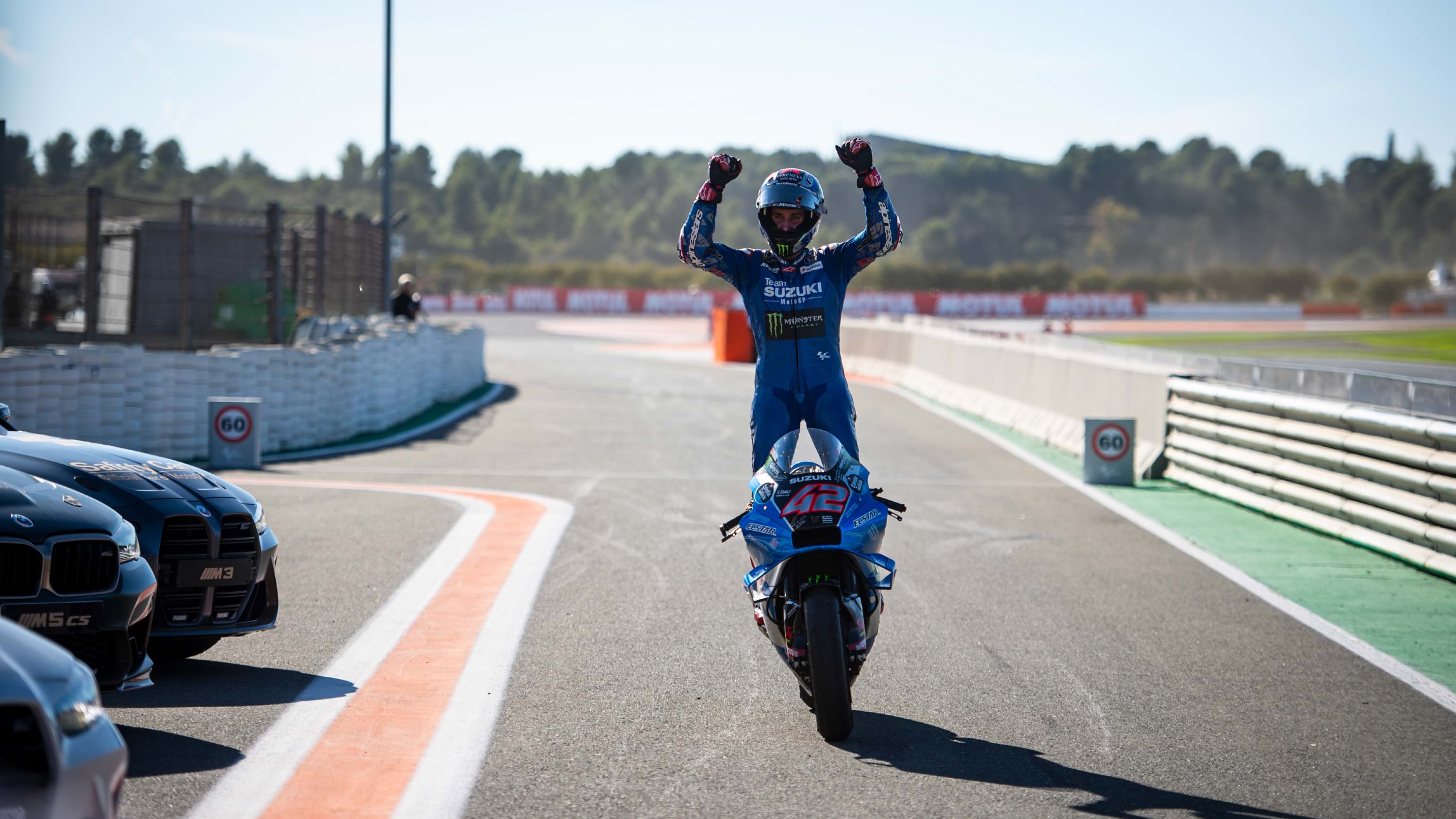 2014: Although the story started under the spotlights of an official MotoGP test in 2013, the wheels weren’t truly rolling until we entered the championship in 2014. Aleix Espargaro arrived at his first day with the team with a statement helmet reading: “The Story Restarts,” and the intention was set.

2015: The first full season back coincided with the 30th anniversary of the legendary GSX-R1000 and a stunning retro livery was unveiled for the riders, Aleix Espargaro and Maverick Viñales. This ‘bedding in’ year resulted in several Top 10 race finishes and 11th and 12th respectively in the championship standings.

2016: The first sweet taste of success came just one year later, with Team Suzuki Ecstar and Maverick Viñales’ first MotoGP victory at Silverstone. The image of Vinales crossing the line, standing high on the pegs with his arms aloft in victorious form gave the team impetus for more moments like this.

2017: The team welcomed a new line-up for 2017, the dynamic duo of Andrea Iannone and MotoGP rookie Alex Rins. It wasn’t smooth sailing for the squad, but with support from the test riders, Sylvain Guintoli and Takuya Tsuda, and the determination of the young riders, a couple of fourth place finishes were achieved.

2018: Suzuki grabbed an impressive nine podiums in the 2018 season with Rins becoming more confident in the class, taking his first MotoGP podium in Argentina. Iannone also put in some impressive rides – especially in Texas where he wore the Stetson with pride from the top step of the podium.

2019: Fast forward a year, and the Circuit of the Americas enjoyed another Suzuki success; this time it was Rins’ turn! This wasn’t to be the only triumph for the number 42 rider though, and in August of 2019 he took an emphatic and thrilling win at Silverstone. A photo of Rins taking the chequered flag, just fractions ahead of Marc Marquez, with the pair eyeing each other up to the finish line has become an absolute classic – not only in the Suzuki history books, but the MotoGP books too. A fast young Mallorcan talent named Joan Mir joined the ranks in 2019 too, showing flashes of excellence in several GPs. 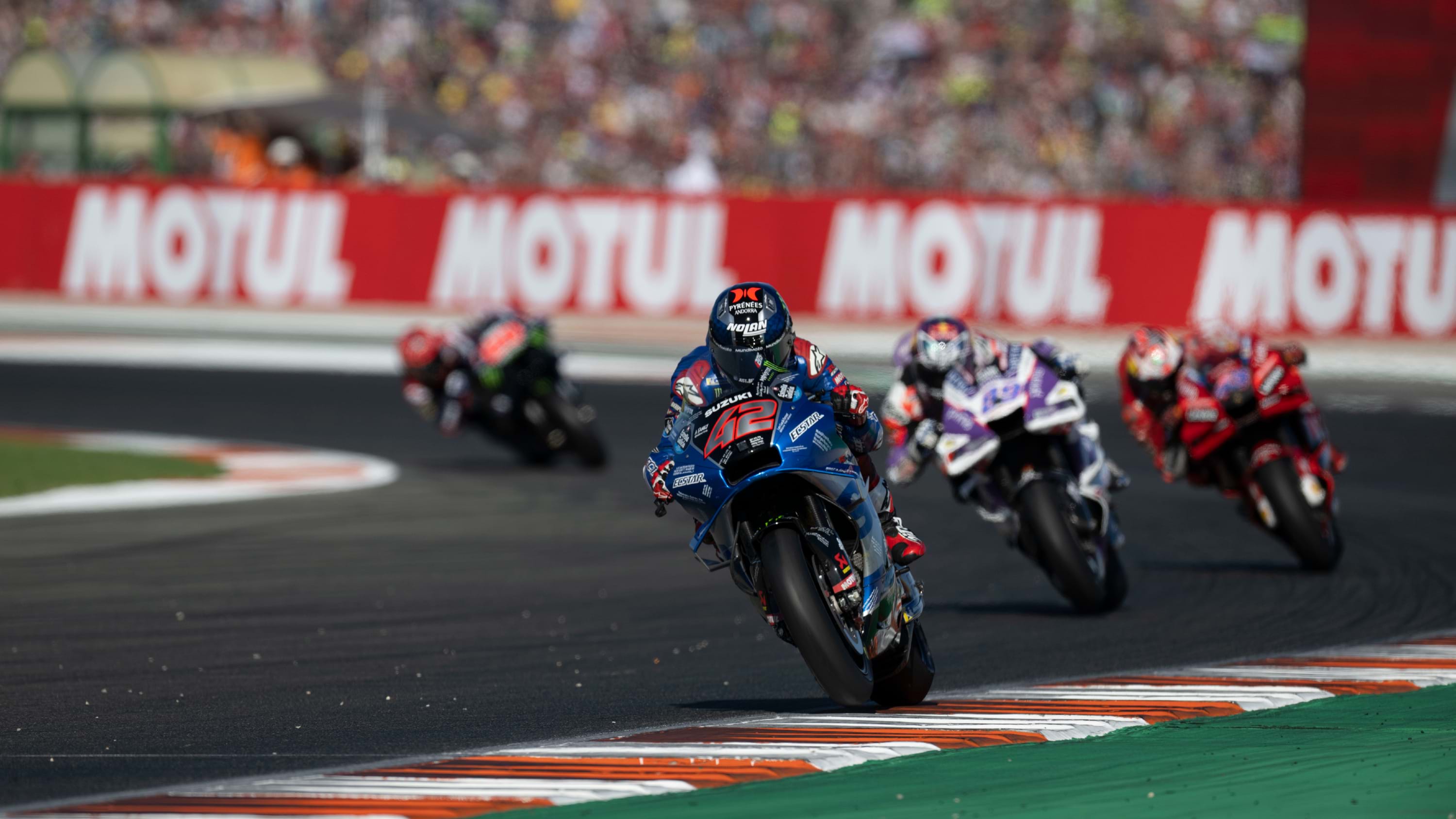 2020: As the world reeled with the emerging pandemic and the MotoGP calendar was left in tatters, Suzuki pulled together and remained focused on racing goals – something which was evident in their month-long stay in Qatar at the start of the season, to protect staff and concentrate on the project. After a slightly rocky start to the season, things soon started to look up for the blue team. Joan Mir put together a sensational season, showing consistency and maturity throughout the year to be crowned MotoGP World Champion and put Suzuki back in the spotlight after 20 years. Coupled with Alex Rins’ impressive form which saw him finish third in the standings, this was truly the ‘comeback’ year for Suzuki – a feat made even more special as the factory celebrated 100 years since their founding, and 60 years in racing.

2021: Entering the year as reigning champions, and with the tried and tested line-up of Rins and Mir, the goal was once again to contend for podiums, wins, and the best championship positions possible. What the team lacked in luck that year, they made up for in tenacity. Rins had a tough year, although a second place at his beloved Silverstone gave a much-needed boost. Mir clocked six podiums through the year, and his consistency gained him third place in the standings at the close of the season.

2022: The final flag. It goes without saying that the highlight of the year for us was Rins’ heartfelt and thought-provoking final Suzuki victory in Valencia – a fantastic reward for the hard work and strong-will shown by the team. Although his nail-biting and ferocious run to the top step in Australia is a close contender. Mir also put in many brave and determined displays. We pulled together for every session of the season, and we stand strong together as we reach the final flag. 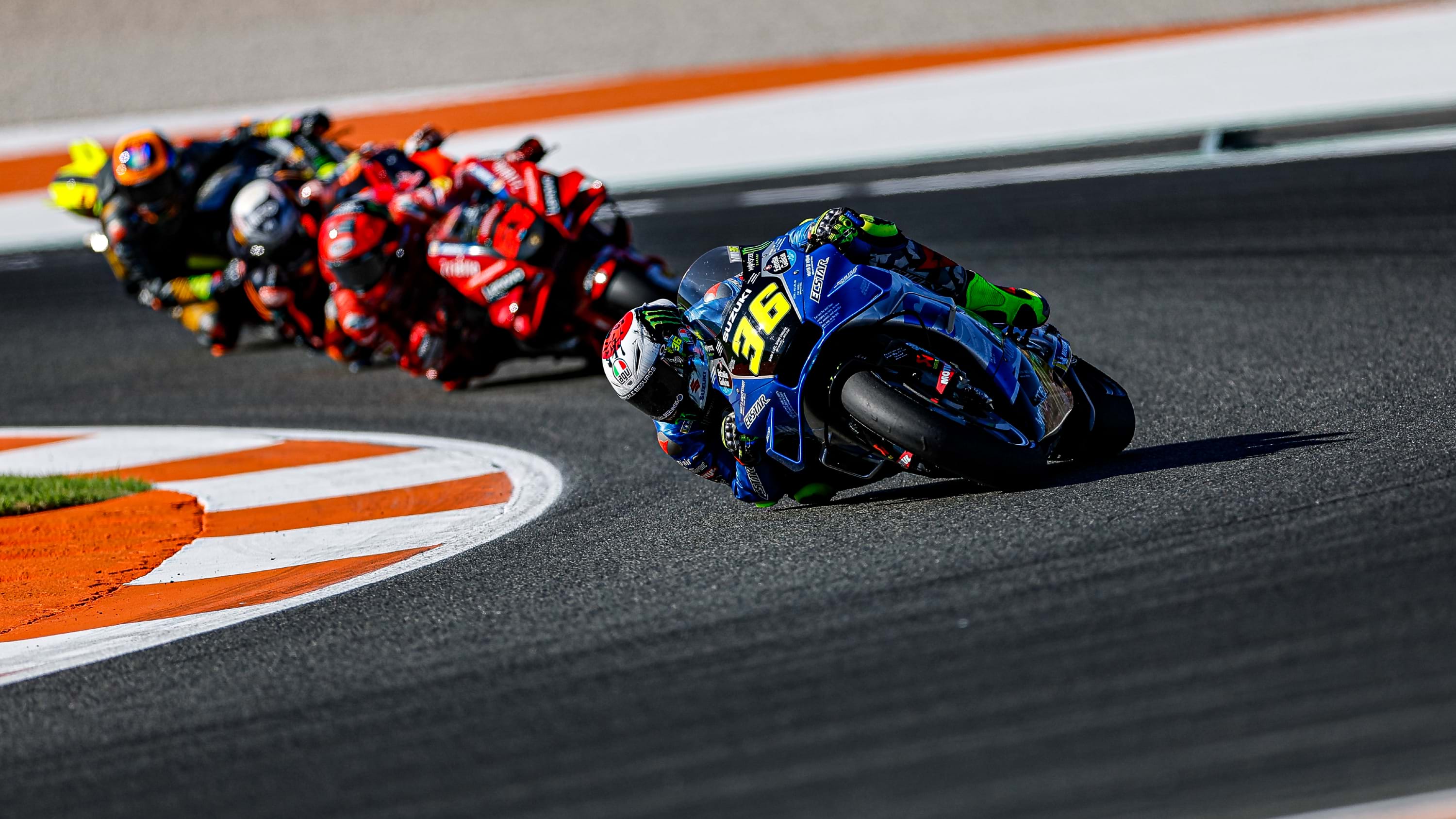 Alex Rins: “Well, I managed to achieve exactly what I wanted: another win with my team. This one, being at home and being our last together tastes extra special and it’s very emotional. Over the years Suzuki and I have celebrated some really beautiful victories, but also shared many beautiful moments as a family. I’ll miss everybody so much, and I’ll carry the lessons with me for the rest of my career.”

Joan Mir: “I’m happy to take a pretty solid finish in my final race with Suzuki, especially after a tough few weeks. Winning a title with this team is something I’ll keep in my heart forever, we’ve worked relentlessly during all our years together, but in 2020 everything just came together for us and it was simply fantastic. Thank you to the whole team for their help.”

Livio Suppo: “What more could we ask for? The only thing better would have been a double podium. But Alex showed, once again, how competitive he and our bike are. And Joan did a great job. My time with Suzuki has been short but very sweet. Working with an iconic brand, with superb people, and a great bike has been a big pleasure for me, and I think we can bow out with our heads high.”

Ken Kawauchi: “Today Alex did a very impressive job, getting the holeshot and leading the whole race, thank you to him for this final victory, and also to Joan for a nice sixth place. Finally, thank you also to all the staff for their work during all the years. We have been a very good group of people, and we always tried hard to get the best results.”

Shinichi Sahara: “Victory today in Valencia! What a great reward for the team. I’m very proud of the staff, the riders, the engineers in Japan – not only for today but for the whole season. We had a fighting spirit until the end, and we leave with a World Title and many victories and podiums.” 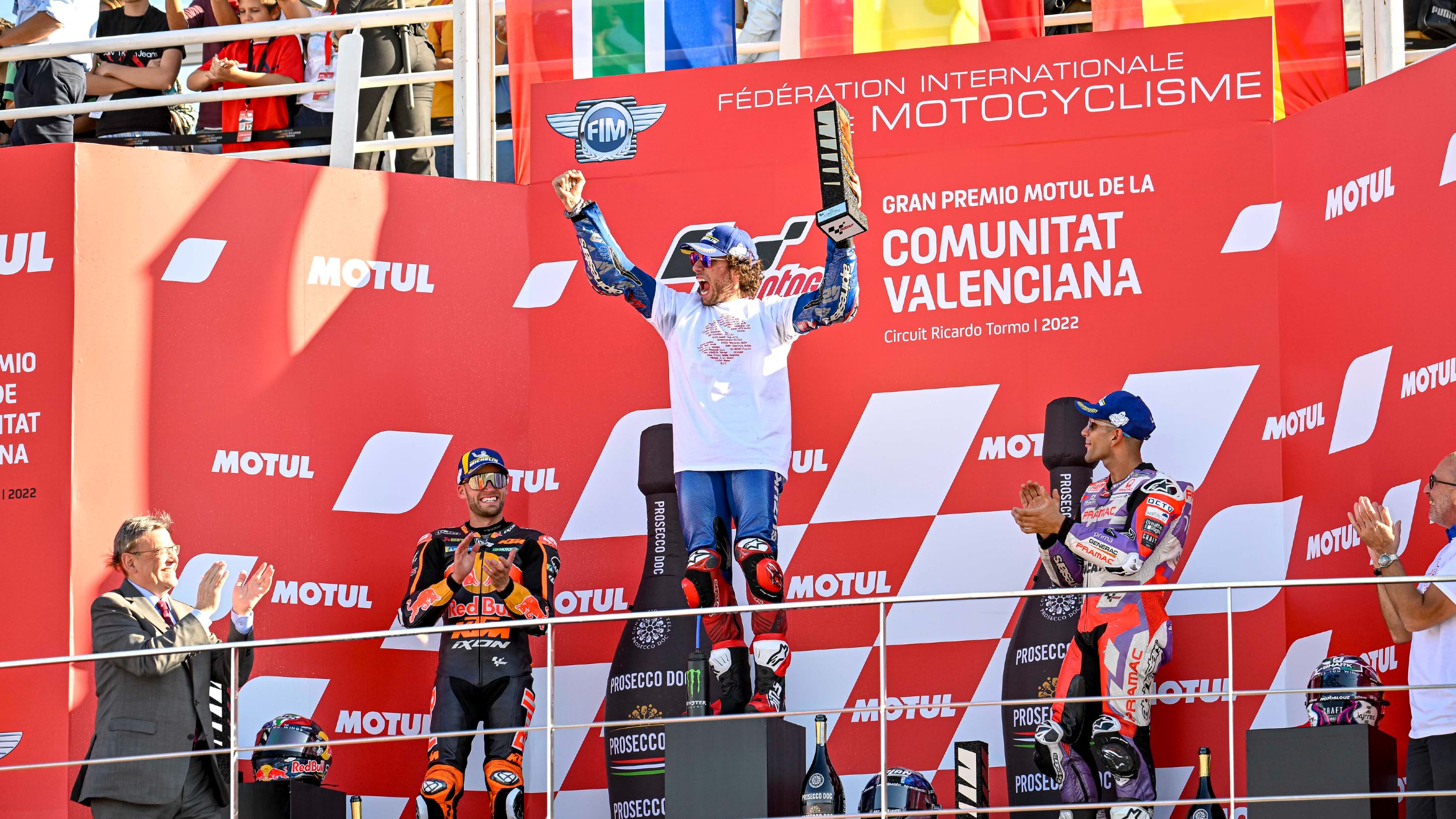