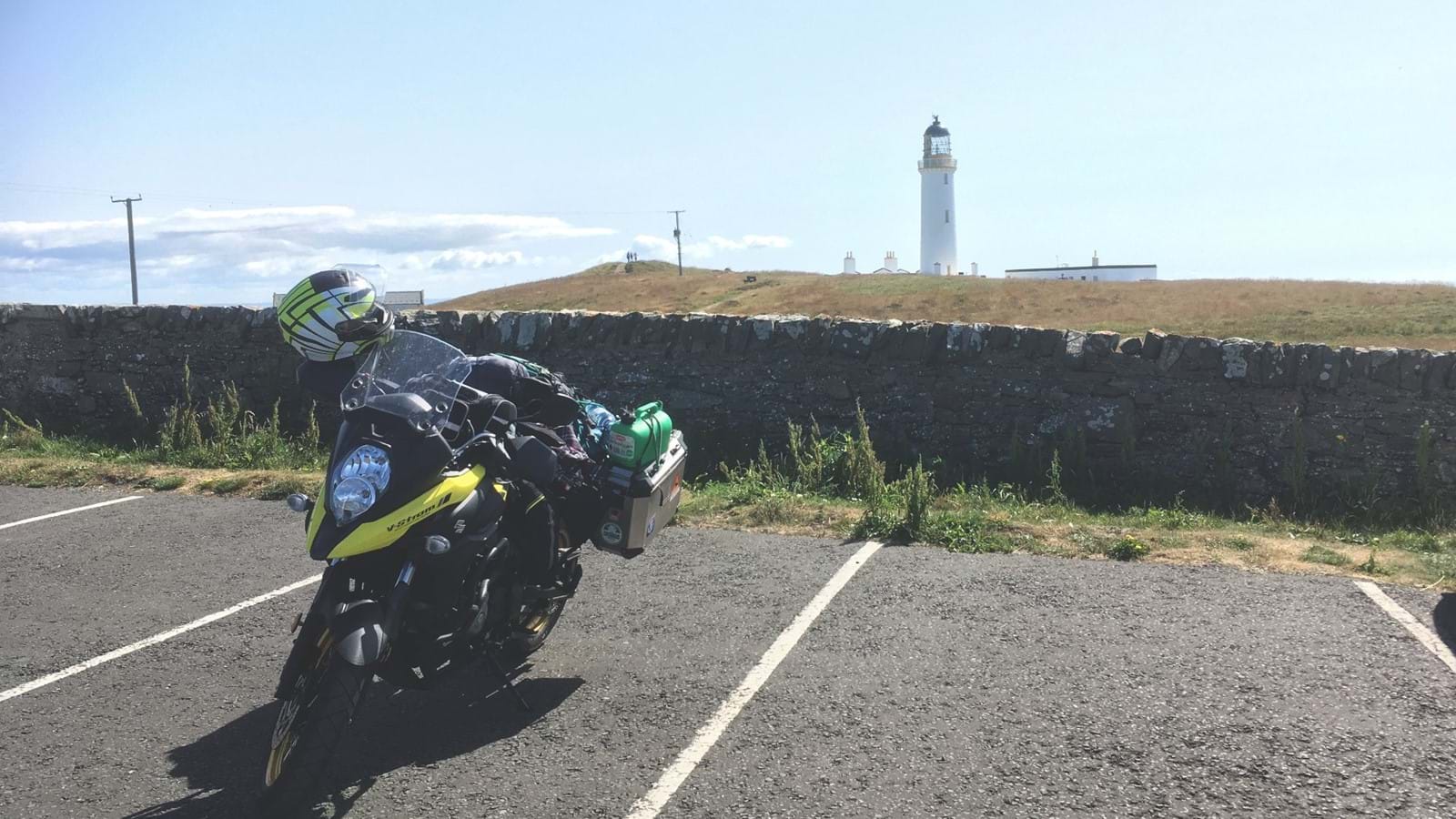 Gordon Stuart is no stranger to motorcycle endurance rides, having completed various challenges previously, from John O’Groats to Lands’ End in 2016, to crossing the Arctic Circle in 2018, all in aid of UK brain injury charity Cerebra and special care babies’ charity Tiny Lives. Originally, Gordon intended his next challenge to be much further afield, until the Covid-19 pandemic had other ideas. Forced to look closer to home, he settled on riding his V-Strom 650XT between the four corners of mainland Scotland: 800 miles – with less than 50 miles of motorway – in under 24 hours.

Continuing with tradition, Gordon would complete this ride to raise money for Tiny Lives, a Newcastle-based charity supporting the Neonatal Unit at the Royal Victoria Infirmary. The charity supports over 750 babies and their families annually, and aims to raise £250,000 a year to maintain this support. Gordon and his wife received this support on two occasions, for their daughter Isla born in 2014 and then again with son Hugo born in 2017, with both spending time on the Neonatal Unit following premature births.

“Tiny Lives holds a special place in my heart,” he explained, “and with this ride I wanted to raise money and give back as a way of saying thank you for their care.” 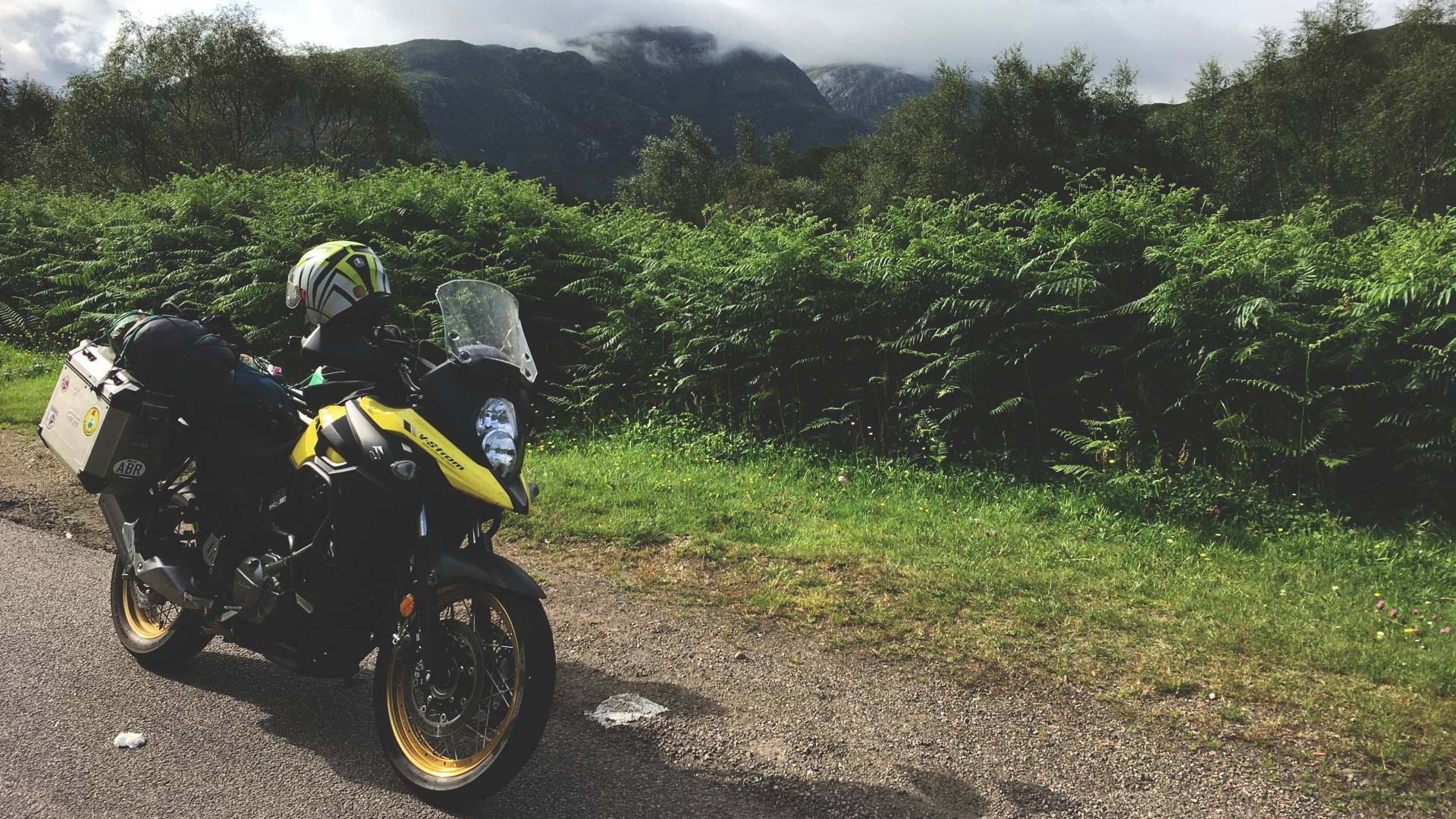 In the run up to completing the four corner challenge, Gordon prepared by riding in the evenings around Northumberland and doing day routes of a few hundred miles, with limited motorway use. The challenge would be Gordon’s first long trip on the V-Strom 650XT, the do-it-all middleweight adventure machine, equipped with Givi Outback Trekker panniers and camping equipment on the pillion seat.

But at midday on Friday 16 July, Gordon set off from the Mull of Galloway, the southernmost point in mainland Scotland.

“The Mull of Galloway was stunning,” Gordon described on reflection. “I was lucky to visit on a lovely morning where from the top of the hill, where a lighthouse sits, I could see the Lake District to the east, Isle of Man to the south and Northern Ireland to the west.

“From there I headed north into Dumfries and through to Galloway and Ayrshire, following the coast between Stranraer and Girvan, before turning northeast towards Glasgow and then onto Stirling, which I reached at around 15:00, and had a brief stop.

“The ride between Stranraer and Girvan along the southwest coast was unexpectedly fun; sweeping bends, large rolling hills, with the terrain of Argyll and the Isle of Arran in the distance across the water. This made me pleased I’d ridden a route that wouldn’t have been on the list.” After Stirling, it was onto Perth and the motorway section of the ride, which took Gordon past the imposing 220ft National Wallace Monument to the north of Stirling. On this stretch of the ride on the M9, Gordon found his V-Strom was comfortably keeping up with the traffic despite being loaded up, admitting he, “wouldn’t want to do a tour like this on a different bike.”

From Perth, Gordon headed east to Dundee through rush hour before turning north towards Montrose, Aberdeen, and then onto Peterhead where he made his next pit stop at 19:00. While there, he visited the most easterly point in mainland Scotland at Keith Inch, part of the Port of Peterhead, utilising the 650's nimbleness in town when looking for the port. From Peterhead the route headed west towards Inverness where Gordon stopped again, briefly, at 22:00.

Once back on the road, Gordon turned north to follow the NC500 route up the North East Coast to Thurso, then onto Dunnet Head, the northernmost point in mainland Scotland. It was at this point that the temperature dropped but Gordon powered on assisted by his heated vest (and an Alan Partridge audiobook!), arriving there for a scheduled stop at 01:00.

“At Dunnet Head I had a much needed, 90-minute rest in my pop-up tent, which, weirdly, was one of the most normal experiences on the trip: I was no stranger to solo camping, but social-distancing and masks was still very much out of the ordinary.”

Following the closest thing he'd get to a good night's sleep, he headed south from Thurso to Inverness before moving south-westerly along Loch Ness to Fort Augustus, where he stopped briefly again at 07:30am, before continuing onto Fort William. “Riding south from Thurso towards the NC500 coastal route at sunrise was a delight,” Gordon recounted. “The road rides high over the plains of Caithness with unspoiled views of the northwest Highlands in the distance. And the route following the Great Glen from Inverness down to Fort William is something to behold. Again, I was lucky to ride in nice weather and doing so early in the morning meant, apart from a few deer, I had the road to myself.”

At Fort William, Gordon headed west towards Mallaig before turning south into the Ardnamurchan peninsula. This brought him on to the home straight towards the finish line at the most westerly point of Scotland’s mainland, Ardnamurchan Lighthouse, where he arrived at 11:21am, 23 hours and 21 minutes after setting off.

“The A830 from Fort William to Lochailort via Glenfinnan – and its famous viaduct – was possibly one of the best roads I’ve ever ridden on a bike; sweeping bends, dips and peaks, it was like the best rollercoaster I’ve been on with good views of the road ahead, long lochs, and mountains to the side. Great fun.”

Gordon had done it: 800 miles, all four corners of Scotland in under 24 hours.

“I was absolutely shattered but it was an amazing feeling to have completed the challenge,” Gordon said on reflection. “I was a little bit emotional actually. It was been beautiful the whole time, and it was amazing knowing I had so many people behind me.

“The bike was really comfortable, and it handled the twisty A and B roads of Scotland sublimely and was really confidence-inspiring. You can just throw it into the corners, and you know it will come out the other side where you want it to, it’s just easy to ride. It just seems such a workhorse. You can pile it high with gear and it just doesn’t care.”

Despite this ride not being part of Gordon’s original plan, he was glad he was able to make something positive out of the Covid-19 pandemic. Looking ahead to his next adventure, Gordon hopes to complete a multi-country Arctic ride to Russia (with no-less than 13 border crossings) to complete his years long ambition of riding a motorcycle across the Arctic Circle.

To donate to the Tiny Lives charity, click here.